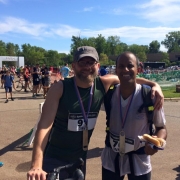 I did my first triathlon today!

How I came to run the triathlon: In my late teens, I was an avid runner and racer. It was a central passion. Much of what I learned about perseverance, focus, and resilience, I learned from running. As I got older, other areas of my life took priority. Commuting by bicycle, as well as touring, became a suitable replacement form of exercise in my life. Running faded over the years, but in 2007 my friend Cesia suggested we do a triathlon. We signed up for one, I trained, but a week before the race I became very ill with Lyme Disease! (I got it on a 600 mile bike trip from Minneapolis to the Boundary Waters; that’s another story). Since then, I’ve had knee issues (caused by Lyme Disease) that have prevented me from running…but I recently figured out I could manage it by not lifting my legs very high when I run.

Triathlon preparation: Training for the triathlon was so much fun! I swam about three times/week in the lakes in Minneapolis. I swam laps between the buoys that marked the swim area near the beach. I got several lessons from friends (in exchange for vegan food/cooking lessons). For biking, the only training I did was my regular commuting! I put thousands of miles per year getting around town, so I felt that was sufficient. I only ran perhaps once/week for the last few months, usually two casual miles.

The triathlon: I did the Hopkins Royal Triathlon in a suburb of Minneapolis. The swim was going to be a half mile, but they shortened it because there was lightning in the morning. They had to postpone the triathlon for safety reasons, and they were running out of time so they made it a little shorter. In addition to the swim, it was a 15 mile bike ride and a 5 kilometer run.

How it went: This race was mostly about having a sense of accomplishment and using the training as a way to be fit. Using the skills I had learned as a competitive runner was difficult. I thought I would never forget them, but I think that my memory faded over the decades. I enjoyed the race, and I felt confident the entire time. However, right from the beginning, my legs felt worn out. I had plenty of rest and was in good health in the last few days, and I didn’t think I was very nervous. This surprised me, but I didn’t pay too much attention to it. The transition to biking was smooth, as was the transition to running. The bike ride was the biggest challenge for me to go fast! I am so used to commuting and touring, where I am very intentional about going at a pace where I can enjoy my surroundings. I am used to pushing myself only when going much longer distances (50+ miles). I ran about what I thought I was capable, but I could sense my lack of competitiveness. I finished in one hour and 42 minutes, which put me 121 out of the 270 finishers

After: I had been in touch with the race director for months, and they provided veggie hot dogs in addition to bread, bananas, and a few other vegan options!

*Note: I don’t blog regularly and I don’t necessarily plan on it. 🙂