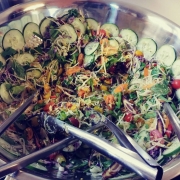 On Sunday, March 4, 2018, I hosted a Wellness Day for Animal Advocates at the People’s Movement Center in Minneapolis.

There were two inspirations to create this event:

Overview of the Day

We incorporated the following activities:

Next, I led the discussion about sustainable activism. We broke into small groups to discuss what challenges we face as activists and how to deal with them effectively. Then, we convened as a group and discussed the topic. Some of the key takeaways that came up were:

We had 20 minute massages for attendees by professional massage therapists, Ashley Riddle and Natalie Brown. These massages were in a separate room to provide a peaceful environment. We had a gratitude board where we wrote up what we were grateful for, to help us focus attention on the positive aspects of advocating for animals. We had delicious and nutritious lunch catered by a vegan catering company, Root to Rise.

After lunch, we had a session of qi gong, led by Gabe Keller-Flores. This gave us an opportunity to move and loosen our bodies. Following this, we had a journaling session led by AmyLeo Barankovich, Director of Humane Education at SoulSpace Sanctuary. During the journaling session, we were given prompts: how we first connected with compassion that inspired us to be involved in animal advocacy, what obstacles we faced, and what we might do to re-engage with our compassion. We distributed a flyer of take home resources and attendees filled out an evaluation.

We had about 30 attendees. They were affiliated with farm animal sanctuaries, a vegan boutique, a vegan business, a dog rescue, a student organization, a group that focuses on dietary change, and several more who were not directly affiliated with any organization but volunteer for animal protection causes.

Many of the attendees knew some other attendees, and this event helped deepen the community. Attendees often expressed being overworked and frustrated in engaging with the public.

I decided not to share any photos publicly. I did not want to give attendees the sense that what they were experiencing would be on display, and they could authentically participate and be vulnerable.

Thoughts on the event.

Some things attendees said they wished had been different about the event:

Several people had mentioned that it was too warm. I recognize that to improve the event, I could ask people for feedback as the day unfolds.

Here are some of the things that attendees said they appreciated about attending the event:

Some things that I learned about the event:

I am grateful for the volunteers, donors, and practitioners who contributed to this event, along with the people who gave input on how to run the event.

Thoughts About the Animal Rights National Conference 2018
Scroll to top