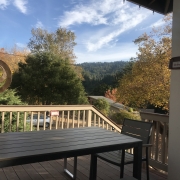 Summary: I went to a meditation retreat for animal advocates! It was really easy to relax, and it reminded me of the wisdom that I have learned about living in peace and harmony with myself and others. Going to the retreat helped me re-commit to my new project of healing and wellness for animal advocates. Read my story to learn about some of my first experiences with meditation.

I attended the 2018 Thanksgiving Meditation Retreat for Farm Animal Advocates last month in the San Francisco Bay Area of California. The retreat was planned by long time animal protection activists and meditators. The same folks had hosted meditations at the Animal Rights National Conferences in 2017 and 2018. I had attended those meditation sessions and found them to be healing and helpful, so I wanted to attend my first-ever meditation retreat.

Activities at the retreat

The retreat was a week long, and each day included meditation, yoga or some physical activity, lecture and discussion, meals and chores, and breaks. The schedule was simple and regular. The instructor is a Buddhist monk. The meditations were guided, and were an hour or less. Meditations included kindness meditations, walking meditations, and more. I usually took naps during breaks, and often walked up the road from the meditation center.

My experiences at the retreat

Some things I learned or remembered

Post-retreat reflections and next steps

Story: My first experiences with meditation

My parents immigrated from India before I was born, and I was raised in the United States and was raised Hindu (1). Only many years later would I come to recognize the practices I participated in as meditation. At the Hindu Mandir (then in Minneapolis), starting around age 5, I did some yoga. Later I continued this at the School for Indian Languages and Culture, which is a secular institution. I remember saying to my dad that shavasana is the easiest pose. He countered that it was the hardest, to have the mind be still (I now understand meditation as something different, see below for details). Especially in India, which I went to every few years, we would often pray to Shiva, Krishna, and miscellaneous gods at the temple or shrine at our house or go to the nearby temple. I also had my Upanayam, which is a religious initiation ceremony, and practiced Sandhyavandhanam (daily prayers). What all of these had in common were ritualistic chanting and motions that were simple to do and facilitated the relaxation of the mind.

Later, as a teenager, I became an enthusiastic long distance runner. For a few years I ran most days, sometimes alone. Running regularly made it so I could raise my heart rate to a certain level that was enough of a challenge that it was a good workout, but not so difficult that I had to concentrate all my attention to keep up the pace. The mechanics of running are so rote that it takes no thinking to run. I later noticed that running helped me find calm.

These practices benefited me greatly at the time, though I didn’t label them as meditation or understand some of the benefits I now appreciate. Later into adulthood, I have participated and learned about a few different kinds of meditation practices and communities, including this retreat.

(1) Hinduism is an incredibly diverse religion and the practices and beliefs vary enough that I have little idea what other people’s experiences are, or what the religion as a whole is, outside of what I was raised in!

Our Wellness And Liberation (OWL) Retreat
Scroll to top