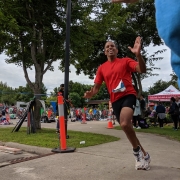 On Saturday, August 31, I completed my second triathlon. It went fantastic!

I chose to do the triathlon to feel alive, healthy, and full of vigor, to celebrate life with friends and family, and do my best. And I was very successful in all of those! 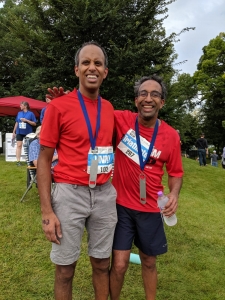 Me (on the left) with my brother, Krishnan. Photo by Devan Nambudiripad

Of course celebrating with others involves their active participation! Thanks to Jil, Roshani, Sheff, Lola, Krista, Devan, Brahma, Neil, Phillip, Bernie, Victor,  and my oldest brother Guptan. Three folks that I helped recruit and completed alongside me were Julie, Mike, and my other older brother Krishnan. Thanks to all of you for participating by cheering me on, sharing food after the event, competing with me, running, swimming, or biking with me in the the last few months, and giving me high fives during the race.

Regarding the high fives…the other triathlon I did was this same one four years ago. Near the very end of the race, somebody I didn’t know held up their hand to receive a high five and I gave it. Later that day, I thought that this is not something I would have done when I competed as a runner when I was a teenager. In those years, I thought little of fitness, the social or psychological benefits (though I did gain much in that regard), and focused entirely on getting faster and competing well.

But I understand things are different now: I do the triathlon (as stated above) primarily as a celebration of life, not to compete and have the fastest time. But I also want to do my best, and I train so I can go faster. It’s a balance. And during this race, I gave high fives with enthusiasm. I also cheered on fellow athletes, especially during the run where I felt most confident. But I also tried really hard to finish as fast as I can, and I was happy to have improved significantly. I also appreciate running as a way to de-stress and center myself, and swimming in the lakes as a way to enjoy and connect with nature. What felt great about this triathlon is that I had a sense of balancing those different reasons to do the triathlon. 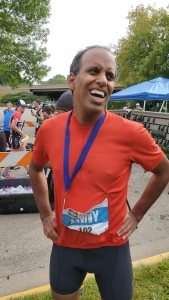 Photo by Devan Nambudiripad (aka my cousin)

I also still feel conflicted about the role of competition in my life and exercise for the sake of exercise. In so much of my life, I try to focus my energy in life-giving or cause-focused pursuits. One of the best examples of this is commuting by bicycle, where I put so much attention and energy to transporting myself to work, shopping, friends’ houses, etc., with the least negative impacts on air quality, climate change, and harming animals (I’m less likely to injure or kill an animal while biking than by driving). I recognize I have physical abilities an social privilege (e.g. being a cis man) that make it much more possible for me to do these things than many others. I don’t have an answer as to where triathlons are to fit into my life, but I have experienced joy and a lot of positive energy doing this triathlon so I am interested in continuing.

They served veggie burgers at the race. The race director, Doobie, has been great about making the triathlon inclusive and providing vegan options. I also found a couple other vegans who did the triathlon! I have been in touch with Doobie both in 2015 and this year, trying my best to help him have good vegan food. I’ve been trying to get other folks to help out and also to find new foods we could serve, both with little success. Nonetheless, I’m happy that the race is serving vegan options. 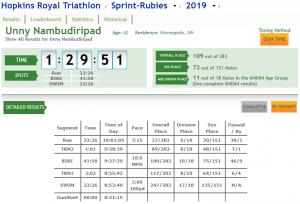 The triathlon involved a 750 yard swim, a 13 mile bike ride, and a five kilometer run. It’s called a “sprint” triathlon, which I think is a misnomer. It takes most people, including myself, around 1-2 hours to complete the triathlon. Success involves thoughtful pacing and stamina. Impressively I was 13 minutes faster than last time — despite that the distances were longer! Both my bike and run were significantly faster. My swim was slower and I don’t understand that, but that’s ok.

I enjoyed the triathlon and I hope it is an inspiration for myself and others to be active and healthy!

Retracing My Steps
Scroll to top