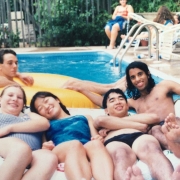 For 20 years, I have been patiently looking for the right opportunity to back to Morris, Minnesota. I’m going there this weekend.

I went to college at the University of Minnesota, Morris for one year, in 1994-1995. It was a wonderful year, and I had intimate friendships and a sense of hope and opportunity that I lacked in high school. I focused my attention on three things: school, running, and friends. All of them went well. My two closest friends were Kenny Feldman and John Vo. I spent so many hours playing and laughing with John, and I remember his wild fantasies and unfailingly soft voice. Kenny and I both transferred to college in Minneapolis, and lived together briefly and became close.

Both Kenny and John died in 1999, a month apart. Kenny died by suicide and John drowned in an accident. I’ve written about Kenny before, and have had many opportunities to remember him. Kenny was instrumental in my involvement in all the social change things I do now. For the last seven years, Kenny’s parents and I have used Twin Cities Veg Fest as an opportunity to honor Kenny. A few weeks ago I gave out the Kenny Feldman Animal Advocate award to Shannon Kimball. I am still friends with Kenny’s parents and Kenny’s brother.

I have not been in touch with John’s family (if you see this blog post, Jim, Angie, Phillips, feel free to reach out to me!) and have not honored his life in any explicit way since his memorial service when he died.

The months after their death was the saddest time in my adult life. It was the first time somebody close to me died. I thought about them every day and felt the void. Not long before Kenny died, I told him how much it meant to me that he got me on my life path. I was and am grateful for that. Now, many years after their death, I do not feel acutely sad.

Ever since Kenny and John died, I have wanted to go back to Morris to mourn again, and go back to where I met them. I knew a chance would come some time. My friend Jill (a Morris classmaate and also a friend of John’s) and I are going to the Anna Lake Animal Sanctuary open house, and we’ll visit Morris after that. I met Dini at the Our Wellness and Liberation retreat in June I co-hosted, and since then I’ve wanted to visit the sanctuary. The sanctuary is near Morris.

I hope returning to Morris will help me feel a sense of opportunity, feel sad and better understand my relationship with my deceased friends, and help in the process of understanding my life path, where I have been and where I am going. I hope to recognize again what inspired me, and acknowledge the parts of my life that are now over.