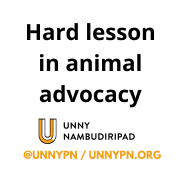 I was inspired by Lead for Minnesota to talk about the ‘mistakes’ I have made and what I have learned, both to reflect upon my own behavior and try to live differently going forward as well as demonstrating vulnerability for others to learn.

One of the biggest ‘mistakes’* was my inattentiveness to relationships at the founding of Compassionate Action for Animals (CAA).

I admit this is hard to talk about. I don’t want to speak negatively about the other folks I worked with back then. It’s also hard to look back at those days and empathize with what I was experiencing and feeling years ago, as there is some pain (there was a lot of hope and aspiration, too!). The entire process taught me so much, and I am grateful for the folks who devoted their time, energy, and patience to the organization and helped me learn and grow.

As I was about to start the conversations that would lead to co-founding Compassionate Action for Animals, I decided I would devote the rest of my life to advocating for animals. I had been involved in social change efforts on several issues at that time, and I found deep in my heart a calling to focus my efforts on nonhuman animals.

In the first three years of Compassionate Action for Animals, I paid little attention to cultivating healthy, compassionate, and respectful relationships with the co-founders and peer activists. It was not a priority for me or for the organization; we focused our attention on what programs we would enact and how we would become a powerful organization. This was incredibly painful for me, led me to leave the group twice, hobbled the organization’s sincere attempts to do the best for animals, and nearly destroyed the organization. For a decade after the organization started, my heart rate and anxiety could rise simply by reading an email exchange from a conversation at the beginning of the organization.

Even before we initially launched the organization, I felt a lot of pain around how the co-founders were relating to each other. We didn’t discuss openly about treating other leaders in the group with respect or care. At the time, I would have said we had different political philosophies on how to run the organization. That was also true, but overshadowed by our inability to empathize with each other, respectfully disagree, and help each person learn and grow. I was so upset with my relationship with others in the group, I left the organization the moment it started. That was difficult for me because the organization was the manifestation of my highest aspirations of creating a powerful force for the animals.

The folks that weathered out those early conversations were almost entirely men. Our organization exhibited some of the worst masculine traits: dominance, toughness, and suppressing our feelings. We exchanged unkind and aggressive email exchanges (the primary way we engaged online at the time, in the late 1990’s), and we made little room to feel and acknowledge what was arising in our personal and activist lives as they unfolded. We also believed that our choices and approach were logical. I was part of this.

After the persuasion of another cofounder who I related well with, I re-joined a year later. But I hadn’t learned the lesson, and soon enough I was once again in a lot of pain about how we were relating to each other. The dimensions of the challenge changed. We were now involved in the serious and incredibly challenging work of investigating and rescuing animals on farms. We needed careful coordination and we were doing work that involved some risk of legal challenges or physical harm.

A year after that, I left again. This time instead of thinking it was about differences in political philosophies, I was confused. I suspected the challenge was in relating to people in healthy ways, but I didn’t pinpoint that. And I certainly had made no attempt to directly address the broken relationships.

Two years later, the organization nearly folded. While I was not involved in the immediate conflict, I believe that the leaders at the time were struggling with the same problems. I was brought back in at that moment, one of the key leaders left, the people still involved reorganized, and we began the process of relating differently. It was the start of a journey of healthier relationships, and a much stronger and effective organization. Here’s what Dave Rolsky, Compassionate Action for Animals co-founder and longtime board member and volunteer leader had to say:

I was involved with CAA at the time when we nearly folded, and I agree with much of what Unny has said. One thing I would add is that most of the people involved were also fairly young, in our early to mid twenties. I look back at my behavior then and I think that I’ve learned a lot about how to better relate to people in the past twentyish years. We definitely would have benefited from a more diverse group of activists, and especially from having some people who were more mature and better at handling conflict than we were.

We started to recognize that conflict was a chance to look at relationships more carefully and thoughtfully. We made more time for relationships and conflict. I reminded myself many times that it was worth it to try to repair relationships, even when it seemed tedious or time-consuming. We created — and even used! — a policy to deal with interpersonal conflict in the organization. We asked people to leave the group when they were being disruptive. I have mixed feelings about this because I know that to heal society we need to repair instead of banish.

Here are some elements that make healthy relationships in organizing work. I’m not a relationship expert, but simply share my observations and reflections. Most of these are connected to each other:

A mutual flow of respect. The key is a desire to hear and learn from the other person, while recognizing that they are striving to do their best in their contribution to the animal protection movement.

Empathetic listening. What is it that the person really needs? What is behind the emotions that they feel? I have studied nonviolent communication and I find it helpful to better understand how communication works. Many times when there is tension or strife, there are unrecognized emotions and needs. Try to listen deeply to people to understand where they are coming from.

Recognition of systemic power imbalances. Because of our race, gender, sexual orientation, ability, or many other factors, we may face unique challenges and it is healthy to recognize them. Diversity in these areas can also help an organization become stronger because it more closely reflects the diversity in society and the organization can engage more meaningfully.

Helping each person grow spiritually, emotionally, socially, and politically. Our ultimate purpose as people is to grow so we can contribute to life. As animal advocates we want to help each person in the organization become the most effective advocate (as they determine it) they can be. And more broadly, we want people to have their experience in an organization lead to their self-actualization.

Trust. We want to be seen as having legitimate interests and concerns when we participate in group activities..

Vulnerability and open to growth. We approach relating to others as an opportunity to be open, honest, vulnerable, and seeing opportunities to learn and grow as animal advocates and human beings.

I won’t pretend that it is easy or smooth to live up to these or that I relate to people in the wisest and kindest ways currently. But I am glad that I can see the importance of relating in a healthy way.

*About the word mistakes: I want to empathize with where I was at rather than shame myself for my past actions. I would like to act differently if I were to face similar circumstances in the future. However, I also understand that I was doing the best I could at the time.