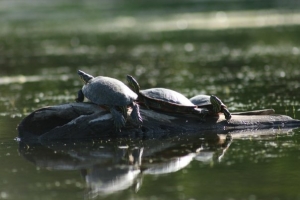 The ride is not great, but not terrible. A lot of the miles are on suburban highways that have decent shoulders and moderate traffic. It would probably be unpleasant to be riding near rush hour on a weekday.

The group site is very nice and secluded. In general the sites are pretty good. The lake is really big but murky so it’s not great for swimming.

When Unny asked if I would be interested in biking to Cleary Lake for a group camping trip, I thought, “Great! I love both camping and biking. Why have I kept these two hobbies separate for so long?” As a city bike commuter, a long ride across the cities was 15 miles. Was it possible to bike 40 miles to this campground and keep up with Unny? What happens if we get lost? What about our camping gear?

Because we planned to meet the rest of our group at the campsite, we were able to put all of our camping gear in a friend’s car. We set off in the morning with only our bikes and the basics: water, food, and a bike tube repair kit. Unny set the pace at a manageable speed. The speed was clearly meant to pace ourselves for the long distance but it also allowed us to have a great conversation and enjoy the scenery.

As a seasoned Twin Cities bike commuter, it’s only on the rarest of occasions that I’ve ever been lost. There’s too many major roads, landmarks, rivers, and lakes to tell me exactly where I am. When Unny and I passed underneath Highway 494, I found myself beyond any familiar roads and rivers. We were now in the realms of the south Minneapolis suburbs and I had a brief lapse of frustration in the unfamiliarity of it all. Was I lost? In reflection on the moment, I realized that I only managed the next leg of the trip by embracing the fact that I had absolutely no idea where I was. In fact, it felt incredibly liberating to bike beyond the comforts of the city! Our bike trip had suddenly turned into an adventure of navigating missed turns, beautiful back roads, and exploring an entirely new part of the metro.

We soon stopped for a food break. While eyeing up each other’s food, Unny asked if I would be interested in sharing our meals. I paused before responding to the question: I’m used to hanging out with non-vegans. That means, when I share food, I bring enough for me and everyone else because sharing is a one way street. But here I was, sitting with another vegan. So I smiled and gladly accepted the offer to share meals.

A few hours later and after many more breaks, we finally arrived at the campground! I was surprised with myself: I had accomplished something that was initially out of my realm of comfort. Even though my legs were exhausted and the rest of my body was aching, biking all those miles was well worth the time and effort. I was incredibly proud of myself and already thinking about the next opportunity to get back on my bike and explore beyond the city limits!