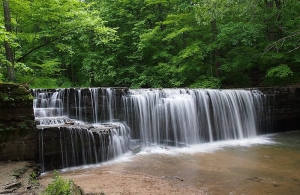 These are the Hidden Falls on Prairie Creek during a heavy spring flow in Nerstrand Big Woods State Park. Photo by McGhiever, Wikimedia Commons license. https://en.wikipedia.org/wiki/File:Nerstrand_Big_Woods_SP-HiddenFalls.JPG

Not particularly pretty but it works fine! There are roads that are not busy to take there.

I don’t recall having heard of cops being called on me ever while on a tour. This time it happened twice!

This was one of the most difficult tours I have done, but not because of the police (thankfully, that went fine). The weather was mostly between 35 and 55 degrees with a mild-to-moderate rain. And there was a very strong headwind on the way back.

During the full day at the park, it rained nonstop. It was cold, and I was mostly getting wet, though my tent was adequately dry and my sleeping bag was cozy. I hiked for hours and didn’t see a single person! I appreciate the solitude. I went to the park building, which was closed at the time, but saw an acquaintance, Emily, who was happy to let me in and warm up and stay dry for a few hours! The rest of the evening I spent in my tent doing nothing (boredom! I so rarely experience this as an adult) or at the picnic shelter running a fire and attempting to dry my mittens.

And oh, the ride back — I pushed so hard to achieve 3 miles per hour against the winds. My mittens were still a little wet and my hands became so numb I lost most of my control. I eventually warmed them up, ate plenty of food, and rode the 50+ miles in 12 hours, completely exhausted. I took naps on the side of the road twice, amazingly able to doze off despite that it was 40 degrees out and I didn’t bother to get out my warm sleeping bag. And that’s when the cops were called, perhaps partly out of concern for me, partly out of fear of me? Can a napping brown man appear to be a threat? I guess so. Both times I had pleasant and short conversations with the police officers and was on my way.